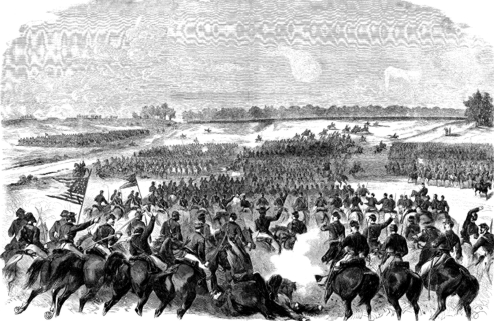 I made a big historical mistake in chapter 19 and it is embarrassing. Having studied and taught the Civil War, I cannot believe I completely forgot Brandy Station. I had Brit state that the cavalry battle at Gettysburg on the third day of the battle was the biggest of the war. That is not correct.

On June 9, 1863, General Pleasanton sent 12,000 horsemen to attack General Stuart’s 9,500 men in and around Brandy Station, Virginia. The battle was the first time the Union put together all their scattered cavalry units, and they were able to stand toe-to-toe with the celebrated JEB Stuart. It was a draw, but it had a powerful impact on the Battle of Gettysburg three weeks later.

Stuart’s men spent much of the time in between fighting delaying battles so that his men and horses were nearly worn out on July 3 when they were most needed. Stuart has often been criticized for wandering all over Pennsylvania instead of sending reports to Lee regarding the Union positions. In fact, Stuart followed Lee’s orders. As to sending reports, the unexpected movements of the Union army cut Stuart off from reaching Lee. He searched for a way around them and missed the first two days of the decisive battle.

As to the Mine Creek, Kansas, battle being the second biggest, General Pleasanton only had 2,500 horsemen, but General Price had 7,000, for a total of 9,500. As stated by Brit in chapter 19, the Union troops had repeating rifles by 1864, which made the main difference.

At Gettysburg, Stuart had only 3,500 men left and Pleasanton had just 3,300. That makes it the third largest in total numbers, but arguably the most important for its impact on the war. Yet, a strong case can be made for Brandy Station as the most important because of the moral boost it gave the Union and because of the losses they inflicted on Stuart’s troopers, loses they were hard pressed to replace.