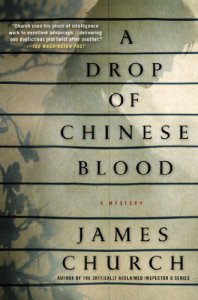 I decided to do all five of these books together, in part because I read them one after another. James Church has created a detective who is adept at his job as well as adept at surviving the infighting that is North Korea.

Church, you should know, is a pseudonym for a “Western intelligence agent.” I think it is safe to assume he worked in South Korea and China, but that he also visited the north on occasion. At any rate, he knows more about North Korea than anyone can look up on the internet.

The Koryo is Pyongyang’s main hotel. The discovery of a dead man leads Inspector O into a maze of intrigue, national and international. Each of the other stories are also filled with enough backstabbing to make every reader wonder why anyone would even attempt to find the real killer. But Inspector O refuses to arrest the nearest foreigner and call it a day.

My personal favorite, by a narrow margin, is Bamboo and Blood. In that story, We see O a decade earlier in the starvation times when investigating on an empty stomach was the norm.

James’ prose is neat and clean. He saves his words while creating landscape and action that is vivid and visceral. He is a star, perhaps four star. Book number six–The Gentleman from Japan–will be available in December.