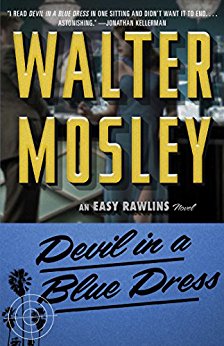 If you are a conservative Christian who does not want to read swear words, you can stop reading NOW.

For the rest of us, Walter Mosely created a character with crust and grit. Ezeikel Easy Rawlins has a house in Watts just three years after helping Patton kick Heiny butt. Growing up poor in the Fifth Ward of Huston did not prepare him for the pure joy of owning property.

Making the payments became the issue when he was unfairly laid off at the factory. A friend sets him up with a short gig–finding a white girl in one of the black bars in the city. You see, Easy was black too, or to be fair to 1948, he was a Negro.

The book was first released in 1990, followed by a baker’s dozen others. Denzel Washington played Easy in the 1995 film version.

Why should you read this book?

It is a great slice of history describing the beginnings of the racial divide that has found Watts on the national news many times. I took a sociology class in the fall of 1965 in which we studied in some detail the findings of the August riot of that August–the “Burn, Baby, Burn” riots. After living through sit-ins and Selma, it was still an eye-opener for a milk-toast Kansas boy. Of course, worse was yet to come.

You should read this for the characters. None of them are righteous and none are pure evil, though you might wonder about a couple of them.

But also try to understand the complex relationships these people have with one another. Easy has friends from Huston to help him in LA, some of whom only help for money, some for friendship, some only when they benefit. Easy must walk a fine line to decide who he can really trust.

Read it because Easy is not perfect. He learned to kill people–blue-eyed German boys–but he wants to avoid killing. He did not like it in the war and he still does not like it. Still, he is surrounded by it in the story.

Many would argue that this is not a Christian novel. I disagree. It is not religious, but that is something else. It is Christian in that Easy wants to do what is right. He is willing to place himself in mortal danger to help others. He is not a cynic. He hopes to be paid, but if you read closely, he is willing to do the right thing without pay.

Easy is a product of black poverty, but he doesn’t want that history to drag him down.

I look forward to more of Easy Rawlins.