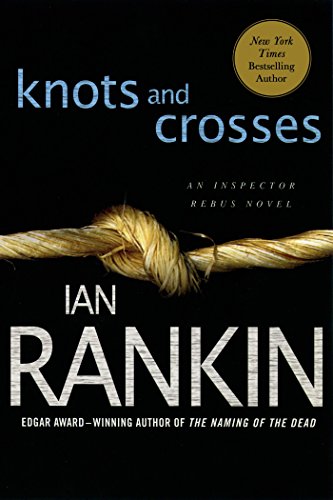 The John Rebus detective series set in Edinburgh has been successful since Knots and Crosses came out in 1987. This coming October, book number twenty-two is to be published. Rankin has published numerous other books as well as plays and short stories.

John Rebus is a man who believes in justice but is so flawed it is sometimes hard to see him as the protector of the public. In this case, the killer picks him out to receive a note after each murder. The first reads: THERE ARE CLUES EVERYWHERE. The envelope also contains a piece of twine tied in a knot. Rebus discards it as a crank. The next has a note and two matchsticks tied in the form of a cross. It still makes no sense to him.

We readers know the notes are from the killer–we learn that on page one–but we are as clueless as Rebus. It is not until about the two-thirds mark in the book that we receive the information we need to understand the notes. The rest of the book is about finding the killer.

I confess that the first third seemed to be going nowhere. Rebus was lost and so was I. He spent too much time remembering his youth with no apparent connection to the case. By sticking with it, I eventually saw the connections.

An interesting feature of the Rebus character is his desire to connect with God. He is not sure God exists but he wants Him to. He prays to God in his down times. That characteristic is at odds with the rest of the man–a man who drinks, smokes, has no friends, and regards most people as lepers.

The library copy I read is only 179 pages, so this is a short novel. It is a good read at, say, three and a half stars.