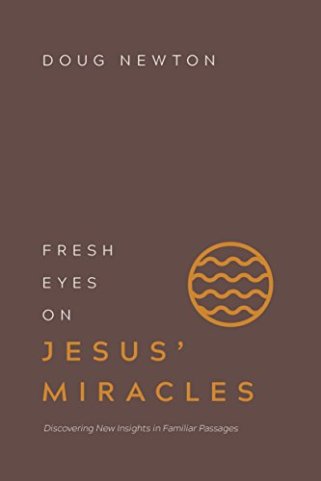 In this slim book, Doug Newton looks at ten miracles, one of which is actually credited to Peter and John in Acts. He does not provide a complete analysis, rather he looks for the one or two hidden-in-plain-sight statements that are mostly overlooked, but which provide important clues to Jesus’ message.

Case in point is John 2:1-11, turning water into wine. Mary says to Jesus, “They have no more wine.” It is a simple statement, but Newton asks us to imagine hearing Mary say the words, most likely with several exclamation marks!!!

The reason is that a wedding was the social event of the year. Everyone was there. It generally lasted several days. Food and drink were freely available. The master of the banquet had to make sure there was enough. If he allowed either to run out before the end, shame and disgrace fell on the father of the bride. It was grounds for a lawsuit.

We are not told why Mary was so involved. It is possible that the master was a friend or relative. Notice, though, that Jesus did not say no. Also notice that Mary acted as though he had said yes, giving the servants instructions. And Jesus went along with it by telling them to fill the six stone jars.

The jars generally held twenty to thirty gallons of water used for ritual purification. I like Newton’s description of the chemistry involved. Jesus started with H2O, added carbon, tannins tartaric acid, malic acid, and citric acid. As Newton put it: In short, He didn’t just sneak some red food coloring into the water when no one was looking.

I am eager to read Newton’s other two books in this series. He also has several books on prayer and several others listed on his website,