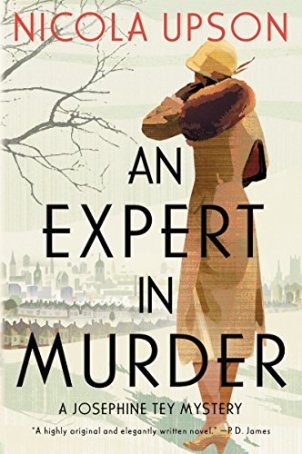 If you recognize the name, Josephine Tey, you may know a mystery writer by that name. It is the pseudonym of Elizabeth Mackintosh who was born in Inverness, Scotland, the home of the fictional Josephine Tey of this book. Mackintosh wrote mysteries under the Tey name in the first half of the Twentieth Century. Upson, from Suffolk, England, chose Tey as her main character because the real Tey had great personal strength. Confused?

The main character of this story, and seven more when the latest is released this coming October, is a Scottish writer who has, in 1934, the longest running play in the history of the West End. Of course, Agatha Christie’s The Mousetrap opened twenty years later and is still running, but nevermind. I suspect Upson calculated that in her choice of 1934

As the fictional Tey travels on the train to London, she becomes acquainted with a fan who is murdered and the crime seems to be connected with Tey’s hit play. The investigating officer is Detective Inspector Archie Penrose who just happens to be a close friend of Ms Tey.

In spite of the coincidences, this is a good story. You may figure out who did it, but it will take you a while.