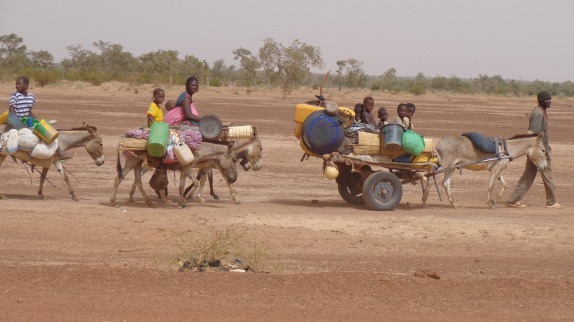 Image by MAMADOU TRAORE from Pixabay

Many Christians and many non-Christians have difficulty reconciling the God of the Old Testament with the God of the New. The story of the capture and subjugation of the “land of milk and honey,” is bloody and brutal. That story also supported the Europeans in the invasion of the Americas—kill those who will not submit.

We don’t have enough time or space to look at the many questionable passages here, but we have part of the answer in the reading from Exodus. As Moses approached the burning bush, God said, Do not come near; take your sandals off your feet, for the place on which you are standing is holy ground. ESV

In this account, the holy ground is at Horeb, also called the mountain of God. As we read through the Bible, we come to realize that holy ground is wherever God interacts with His people. The true meaning, then, is that all ground is holy because God is everywhere.

We can learn about God’s actions in ancient times by a careful look at Horeb. While you can visit Horeb today, to do so will require visiting several mountains that claim to be the mountain of God. It is somewhere in the Sinai, which is much larger than Israel itself. Horeb may refer to a range of mountains of which Mount Sinai is one.

That is fine. We know God is everywhere, so why have tour buses lined up around one place, where hawkers are selling genuine photos of God, autographed?

The first message of this reading is that God is here. Wherever I am, He is here.

Verse 4 gives us another lesson in the form of two names for God. When the Lord saw that he turned aside to see, God called to him out of the bush. ESV

The first name used is Lord, in Hebrew, Yehwah, or the Tetragrammaton. It is יהוה in Hebrew and is considered the name God allows humans to know, though not His true name. His true name has never been revealed to us. By the First Century, speaking the name was allowed only to priests in the Temple. When the name appears in a reading, Jews, then and today, substitute another name—generally Adonai, or HaShem (The Name). Yehwah is used 5,410 times in the Old Testament.

Lest we get hung up on one name, the Bible has dozens of names for God. The name to use is the one that best fits a situation. [Sidelight: Jehovah comes into English from German scholars. In German, the yh sound is best matched with j. The y in German is nothing like it is in English. So, in English, the name should be pronounced Yehovah which is the way Germans pronounce it.]

Verse 9 reads, And now, behold, the cry of the people of Israel has come to me, and I have also seen the oppression with which the Egyptians oppress them. ESV There are a couple of things to consider here.

First, God knows what is happening to the Hebrews. He chose them before they were a people when He called Abram to follow Him. God planned for Abram to have 12 great-grandsons and for them to wind up in powerful Egypt. The descendants spent centuries there, knowing little of their past. Eventually, they were forced into slavery.

We do not know the extent of their slavery. In the preceding chapters of Exodus, we read that slavery was designed to exhaust the men so that they would not father so many children.  Failing that, Pharaoh ordered all male babies to be killed. This is the reason for the account in Matthew of Herod ordering the deaths of all male children under age two and of the escape of Joseph, Mary, and Jesus into Egypt. Egyptians saved Jesus as they saved Moses.

Point two. The Hebrews were not the only people on earth who were harshly treated, yet they were the only ones rescued by God. It was not because they were faithful to God, nor was it because of the faithful midwives of chapter 1.

God chose the Hebrews centuries before they became Hebrews. Over many centuries, God gave the people lessons about his power; culminating at first in the Exodus, then in the kingship of
David, and finally in Jesus.

We must never forget that God chose us, not that we chose Him. Our only choice is to accept God, or not.

To fully understand the passage in Luke for today, we need to look at the politics of Judea in the First Century. To help, I found an excellent article you can read if you want. You will find it at https://scholarsarchive.byu.edu/cgi/viewcontent.cgi?article=1013&context=studiaantiqua

I will give a summary of the key points. The history goes back a century before the time of Jesus. Rome was still a Republic ruled by the Senate. The leader of the Senate then was a man we call Pompey (not to be confused with the city of Pompei). Pompey decided to use the practice of patron-client in his dealings with Judea.

Roman culture was built on the patron-client system. Nearly everyone was both. As a middle-class teacher, I would be the patron of all the young boys (never girls) who wanted to follow me. I would provide an education for them, and they would provide for my needs; keeping house, cooking, etc. I, in turn, would be a client of a few wealthier men, often fathers of the boys, who would make sure I had money to survive and continue teaching. The education was free.

Pompey, in 63 BCE, stepped into a civil war in Judea and placed Hyrcanus in his rightful place as High Priest and Antipater as governor. He became their patron. It was not just in name. He gave them money when they needed it. He loaned troops when there was trouble. Pompey used his influence in Rome to make sure the two men were successful in Judea.

Hyrcanus and Antipater returned all the support they could to their patron. Naturally, they collected taxes and sent a large portion to Pompey, but they also defended him in their region against anyone who opposed Pompey. It was a mutual aid society, with Pompey getting more than Judea got. But, in exchange, Antipater and Hyrcanus ran the country as they wanted, within some limits.

When Julius Caesar was murdered in the Senate, civil war broke out. Mark Anthony was able to control Egypt and the eastern portion of the Republic for a few years. Governor Herod threw his full support to Mark Anthony who got the Senate to name Herod King of Judea. He would become known in history as Herod the Great.

However, there was a huge bump in the road to greatness. Octavian defeated Mark Anthony and became the sole ruler of the Republic, later called Augustus. Herod faced death for backing the wrong contender. He packed his bags and went to Octavian to seek forgiveness and give Octavian a pile of gold if he would allow him to continue as king. For his part, Octavian recognized Herod as being tough and able to rule the difficult Jews.

By the time of Jesus, Herod died and left three of his sons in charge. Archelaus received Galilee, and Herod Antipas received Judea. Rome soon removed Phillip. His ten wives gave him twelve or thirteen children, two of whom he executed, along with their mother. The large family thrived on the patron-client system and continued to play important roles in the first century of Christianity. Ten of them are mentioned by name in the New Testament.

When we read in verse 31 that Herod Antipas is out to get Jesus, we need to understand that Herod was under pressure from Rome to maintain stability in Judea. Anyone who might be a threat to Rome had to be eliminated.

In what way were the actions of Jesus a threat to Rome? Healing people? Neither Rome nor Herod had a problem with that. The issue was that hundreds of people flocked around him where ever he went. Crowds of people can quickly become mobs and mobs can become armies. We have seen it happen on TV, so that should not be a shock.

You might be thinking that Pilate did not want to execute Jesus, so Rome was not worried about him. Pilate was there to protect Rome, true, but he was a client who was only slightly better placed than Herod, who also had powerful patrons. They were rivals. Just a couple of years before, Pilate had received a threat of removal from office for his abusive treatment of the Temple, so he had to tread lightly. He decided to let Herod take the blame if it went wrong.

That is the negative side of the patron-client system. If a mistake is made, it is always the client who made it. Pilate had to shift blame, just in case.

Jesus, on the other hand, was acting as a client of God. It did not matter what either Pilate or Herod did; Jesus did what God led him to do.

There is another important detail to remember. The client of a patron must always know what the patron wants. Jesus had the Holy Spirit leading him every second of the way to the cross. Jesus never doubted what his next step would be.

I must strive to have that constant relationship with God, that understanding of his will, that will make it possible to follow in Jesus’ footsteps. None of us can do it as well as Jesus did, but the saints do it very well indeed.

Why did Jesus say, it wouldn’t do for a prophet of God to be killed except in Jerusalem! CJB Prophets had been killed in the city for centuries. This is one of Jesus’ little jokes. I’m a prophet, Herod plans to kill me. I must get to Jerusalem where so many others have been killed. Yes, a dark joke.