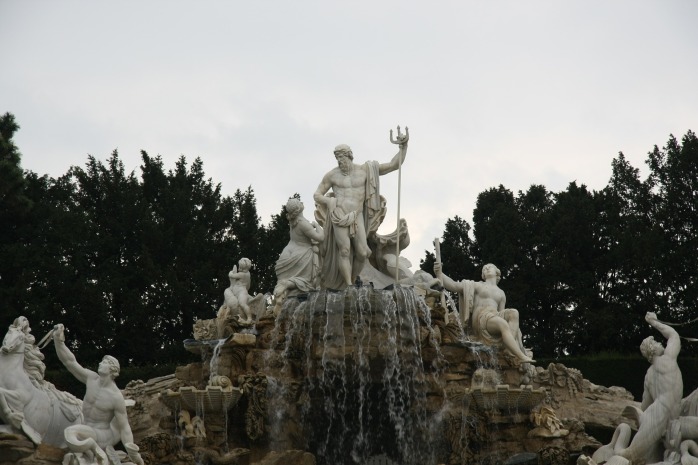 Image by apsolut from Pixabay

Today’s reading in Jeremiah begins with a difficult verse, proven by the fact that the translations are all over the place. The transliteration reads; A God from near I, says Yahweh, and a God from afar. The Interlinear Bible

Several translations turn it into a question, as in; Am I a God at hand, declares the Lord, and not a God far away? ESV This one may mean the most to us today; I am a God who is everywhere and not in one place only. GNT

However, while the NIV has an awkward wording, their Cultural Backgrounds Study Bible has an excellent footnote. There were in ancient times, two basic types of Gods, local and far away. The local gods lived in small areas such as villages, streams, mountains, a single farmer’s field, etc. The local god oversaw whatever was his specialty. The god of the stream would see that the water flowed as needed. The problem was, the gods demanded bribes to do their jobs. Thus, the need for sacrifices.

The far away gods were more like Zeus, Poseidon, and Ares; or as the Romans knew them, Jupiter, Neptune, and Mars. Zeus/Jupiter was the most important god. He was in charge of the rest of the long list of gods, goddesses, and children of the gods like Hercules—sort of. While people gave them respect with annual offerings, it was the near gods the ancients spent the most time trying to cajole into helping them. There was no sense asking for help from Zeus; he was unconcerned with humans. He could not be troubled with such mundane affairs.

Now for the NIV footnote. “Nearby” and “faraway” may combine the aspects of a locally involved patron deity and a powerful cosmic deity, respectively. Few gods in the ancient world would have been believed to fit this profile.

The message, I am a God who is everywhere and not in one place only, is that Yahweh is far enough away to create the universe and close enough to hear my every thought. What’s more, as we continue to read the Bible, we learn that Yahweh is the only God—there is no other, large or small. This Hebrew concept was puzzling to just about everyone around them. Everyone knows there are hundreds of gods and goddesses. Besides, tens of thousands of people made their living catering to all those gods.

Verse 25 opens an important short instruction from God. I know what those prophets have said who speak lies in my name and claim that I have given them my messages in their dreams. GNT One of the puzzles through the centuries has been how to discern who is a true prophet. It is just as important now as it ever was. Prophets live among us today. They are often people we would least suspect. God speaks through all kinds of people. How do we know who is who?

The rest of this reading in Jeremiah assures us that false prophets will meet a bad end. To answer the above question, we need to look at the Monday reading of 1 John 4:1-3. Don’t trust every spirit, dear friends of mine, but test them to discover whether they come from God or not. For the world is full of false prophets. You can test them in this simple way: every spirit that acknowledges the fact that Jesus Christ actually became man, comes from God, but the spirit which denies this fact does not come from God. The latter comes from the anti-christ, which you were warned would come and which is already in the world. Phillips

In practical terms, we can check what a preacher says against what Jesus said. An easy one is almost anything that comes out of the Westboro Baptist Church in Topeka, Kansas. “God hates fags” is not to be found anywhere in the Bible. Not to get into that debate, but I think it is fair to say that Jesus was more concerned with a person’s faith in God than with his sexuality. (I know, God did discourage men from having sex with men, but that’s not quite the same as hate.)

How about a tougher one? In 2007 in Neosho, Missouri, a gunman entered the First Congregational church and shot three members during a Sunday service. The pastor was Tom Thorne, a fellow schoolteacher for over a decade. Should he have started carrying a gun in the pulpit after that, as so many pastors have done? I can’t find anything in the Gospels to support such an action. Jesus even ordered Peter to put down his sword.

This is not an argument against the military or police. Jesus seemed to support both. Yet, he was all about peace. In the new Jerusalem, peace will prevail. On this earth, peace is the ideal, but not easily achieved. We try for it but prepare for the worst.

Reading Jeremiah should warn us of the importance of preaching only the Word of God. False prophecy leads to death. John adds the responsibility of each of us to test any preaching against the teachings of Jesus. That means we need to study the Word ourselves. If someone makes a statement which seems to contradict the message of Jesus—the Good News—then we need to ask some questions.

Any Christian who preaches from the Old Testament must keep in tune with Jesus’ fulfillment of that portion of the Word of God. Adultery is a sin, but eating shrimp, according to the OT, is just as evil. How does the preacher reconcile all that? It’s not enough to quote Peter’s vision in Acts 10:9-16, or Jesus’ with the adulterous woman in John 7:53–8:11; both of which are helpful. It is necessary to look deeper into the Word.

Jesus condemned nearly ever human when he said, I say to you that everyone who looks at a woman with lustful intent has already committed adultery with her in his heart; and whoever says, ‘You fool!’ will be liable to the hell of fire. ESV I stand with President Carter who famously said, “I’ve looked on a lot of women with lust. I’ve committed adultery in my heart many times.” I will not recount my anger issues.

What does Jesus offer to those of us who know we have sinned—violated all ten of the Ten Commandments? Forgiveness.

If Forgiveness is not in the sermon, you should have serious questions for the Preacher.

Read my earlier comments on this theme here and here.