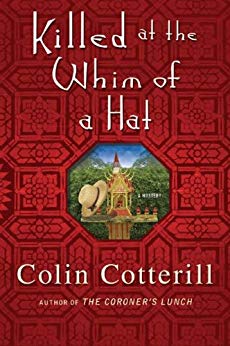 Colin Cotterill is known for his Dr. Siri Paiboun series set in Cambodia. This is the first book in a different series. I just discovered that I read book two some years ago–Granddad, There’s a Head on the Beach. This series is different from Dr. Paiboun. Where his investigation into murder includes humor, this book includes murder investigation in the humor.

Jimm Juree, the main character, and narrator of the story, had been a good crime reporter in Chiang Mai, Thailand, in the mountainous north of the country. But her mother decided to sell their place and move to the south, way south. They currently live in the fictional Maprao (Coconut) and run the Gulf Bay Lovely Resort at the butt end of the country.

Just about everyone we meet is strange, unusual, and generally funny. With all that weirdness, it is no surprise that the first case involves two skeletons inside a VW bus buried in a coconut grove. That eventually turns out to be less weird than other events.

To top it off, Cotterill has headed every chapter with a direct quote from G. W. Bush. He opens with, “Families is where our nation finds hope, where wings take dream.” The last chapter has, “Rarely is the question asked: Is our children learning?”

It is a fun read, but not Dr. Paiboun.