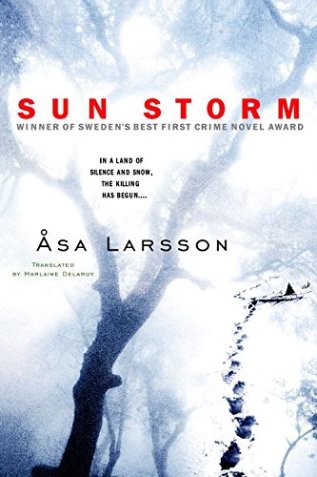 This book, published in 2003 in Sweden and 2006 in the US, is the first of a series of five books featuring Rebecka Martinsson, a tax attorney in Stockholm who is drawn into defending a former friend whose brother was brutally murdered in the far north town of Kiruna.

Larsson herself grew up in Kiruna and became a tax attorney before becoming an author.

In this story, Martinsson faces the humiliation of her youth as she tries to defend her former friend who does not seem to want to help. The murdered man had died once before, gone to Heaven, and come back to life. He became the center of a large religious movement, left in the hands of three pastors who also are reluctant to help.

This book is hard to plug into a single genre. It is a mystery; it is a psychological drama; it is a thriller toward the end. Over the whole story is the presence of religious fervor.

This is a first novel and I think Larsson hit all the key points of a good novel. It does drag a bit at times and she does include some redundancies, but overall it is a good read. I should add that the translator seemed to do a great job. She was  Marlaine Delargy, from the UK.