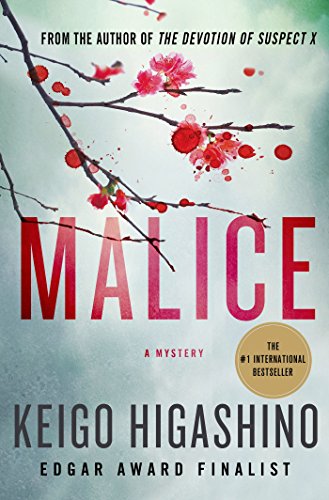 Keigo wrote this in 1996 but it was not translated to English until 2014. It is helpful to remember the ’96 date because there are several references to the technology of the day.
This is the first of a series featuring detective Kyochiro Kaga. However, if you look it up on Amazon, it may say that it is in the Detective Galileo series. It’s not; it’s Kaga.
This particular story is a unique kind of police procedural. Hidaka’s wife made the call from the scene of the murder. She and Hidaka’s friend, Nonoguchi, together discovered Hidaka’s body.
There are nine chapters in this novel. Nonoguchi narrates chapter one. Kaga narrates chapter two as he arrests Nonoguchi. While there is evidence that Nonoguchi committed the murder, Kaga can find no motive and without motive, a sharp lawyer could get him off. Chapter 3 is the confession made by Nonoguchi.
So why are there six more chapters? Four is Kaga’s search for the elusive motive; five is Nonoguchi’s second confession; six, seven, and eight is Kaga’s continued search; and nine is the whole truth and nothing but the truth.
In fairness, this is a mind game between detective and suspect. There are no car chases, no second or third bodies, and no physical violence between detective and suspect. They don’t even shout at each other.
It is a quick read and the Japanese names did not slow me down like Scandinavian or other country names do. If you are looking for action, give this a pass. I for one like both kinds if they are well written and this is well written.