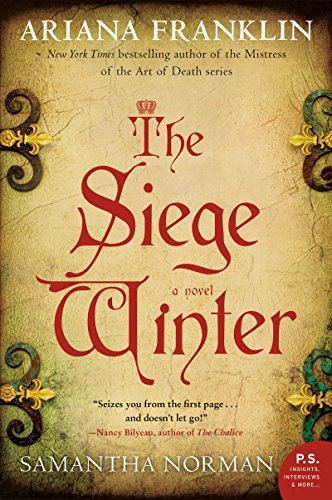 There are two authors listed for this book: Ariana Franklin and Samantha Norman. Ariana is actually Diana Norman who died before she finished this book. Her husband and two daughters talked about the possibility of finishing the book for her and they all agreed that Samantha wrote more like her mother than the other two.

So, this book is written by two Normans.

That is a nice coincidence because the story is set in the second century of the Norman Conquest of the Anglo-Saxons of England.

There are two female protagonists,  eleven-year-old Emma who is raped and left for dead in chapter one, and Maud of Kenilworth, a fortress coveted by both King Stephen and Empress Matilda, also called Maud, in their nineteen-year civil war.

In spite of the obvious guess that the attacker of Emma will be dispatched in the last chapter, getting there is a great ride. Emma’s life is saved by a mercenary, Gwyl, who cuts her stunning red hair and dresses her as a boy. She also becomes a great archer and can pick off any target from distance. That comes in handy when they end up trapped in Kenilworth under siege by King Stephen.

I like the book. It is brutal but honest and the lead characters are real with unlikeable habits, but honest intents. Diana and Samantha did a great job.