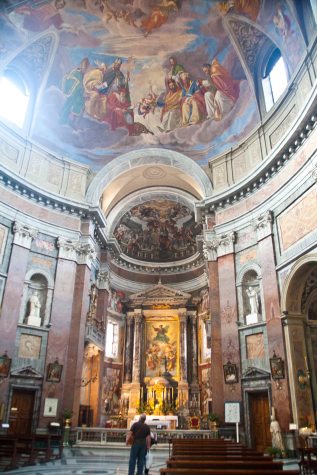 God knew what he was doing from the very beginning. He decided from the outset to shape the lives of those who love him along the same lines as the life of his Son. The Son stands first in the line of humanity he restored. We see the original and intended shape of our lives there in him. After God made that decision of what his children should be like, he followed it up by calling people by name. After he called them by name, he set them on a solid basis with himself. And then, after getting them established, he stayed with them to the end, gloriously completing what he had begun. MSG

It is essential to remember that Paul is writing to the Church in Rome. He had never been there and was not writing to people he knew. He hoped to get to the great city, so composed a theological statement of Christianity by way of introduction. It is the most scholarly letter he wrote.

The main key to understanding the letter is to know that Jews were expelled from the city in 49 AD and only began to return in the mid 50’s Paul wrote about 57-8 AD. The reason the expulsion is important is that in included all the Jews who followed Jesus. Before the expulsion, the Jesus-Jews lead the worship for all the Christians because they had the knowledge of the Scripture that the Jesus-gentiles did not have.

When Paul became aware of the church’s struggle, he decided to give them guidance in the form of the letter. Understand that the gentiles did not give up, but they did change how they worshiped together. When the Jews returned, changes were again made, but not to return to the old ways. A compromise came into being and this letter helped both groups to work together. Even so, the Jesus-gentiles over the next decade separated themselves from most Jewish influence.

In today’s reading, Paul is reminding us that we are made in the image of Jesus. The human Jesus existed before Creation, at least in the mind of God. In Genesis 1, we read, And God said, Let us make man in our image, after our likeness. KJV The word translated man is adam in Hebrew.

The next verse reads, So God created man in his own image, in the image of God created he him; male and female created he them. KJV (It is chapter 2 that creates a gender issue for some people.)

No where in Genesis is Jesus mentioned by name, but these two verses were understood by Jews long before the First Century to refer to the Promised One, the Messiah.

Paul does not need to explain all that to the Jesus-gentiles because he knew the Jesus-Jews would have taken care of that detail long ago.

What Paul does is to connect the dots from believing in God to following Jesus. It is one in the same.

Calvin had trouble with God knowing before Creation that I would be writing this post. His contribution to the Protestant Reformation was to stress that you and I have no control over our salvation. God chose some people to save and the rest are doomed. Calvin was the inspiration for the group of early settlers we call the Pilgrims. While the modern Presbyterians have sanded off the rough edges of Calvinism, especially predestination, the Southern Baptist have rediscovered his teachings.

I have become absolutely convinced that neither death nor life, neither messenger of Heaven nor monarch of earth, neither what happens today nor what may happen tomorrow, neither a power from on high nor a power from below, nor anything else in God’s whole world has any power to separate us from the love of God in Jesus Christ our Lord! Phillips It is only by living IN Jesus Christ, Yeshua Messiah, that we can have that assurance.

This book was first published in 1941. The above cover is from a 2013 release on Amazon (one reviewer complained about the typos). Find the first edition at your library if you can.

This is the first book of fiction written by MacInnes. It is placed in Germany in 1939 just before the invasion of Poland. Richard and Francis Myles are asked by a MI6 friend to check on one of their agents operating in Austria who may have been compromised. The Myles’ have taken their summer breaks from Oxford every year by traveling around Europe, so this year they would simply make a couple of extra stops.

But this is a spy novel set at the beginning of the war when nothing is so simple.

If you like the genera, I especially recommend this book, indeed, most of her books, because they are rich in detail that is almost impossible for modern writers to match. Helen married Gilbert Highet, the world’s leading classics scholar who both taught at Oxford and secretly  worked for MI6. The two of them spent their summers traveling through Europe. Helen took notes on every place they visited which she later used to sprinkle her stories with all that detail. Highet was lured away to Columbia University in New York in 1937 where they lived the rest of their lives.

Don’t assume that Gilbert told his wife how agents operated. She had to watch what he did as they traveled and make logical conclusions. Violating the Official Secrets Act was a serious offense. I doubt he told her any more than that he gathered information.

The world was very different in 1939. After Germany annexed several neighbors, including Austria, their population was 80 million. Today it is 83 million without the other countries (they lost about 8 million of their population in the war). The UK with its Empire had 550 million; but only 47 million in the UK, today 68 million. The US was at 147 million, 331 million today.  Nearly all countries were still largely rural and good paved roads were in the future, except for Germany.

This is considered one of her best books. Her second book, Assignment in Brittany, was so detailed that is was required reading for all agents preparing to jump into France.