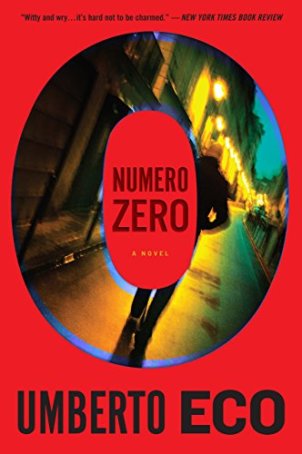 I read this book two years ago, but could not decide if I like it enough to add it to my list. The problem is, it’s by Umberto Eco. I wrote this then and thought it was published. Now it is.

If you know of him you might understand my dilemma. Eco, an Italian, was one of the world’s great writers. He died in 2016, a year after this, his last book, was published. He wrote in Italian, so it is easier to follow the story if you have some knowledge of Italy since 1940.

Italy, like France, has trouble keeping leaders in office. They are a parliamentary government that has had 65 changes since 1945 (66 for France) compared to the UK with 25 and Germany with 24. Just to simplify things, that’s in 74 years.

This particular story is set in 1992. A writer of limited talent named Colonna finds himself on the inside of a brand new national newspaper dedicated to finding the truth behind the stories.

To make sure they have the right combination of talent and style, the team is dispatched to write particular stories to be assembled as practice papers with the number zero for the issue number. As the year of practice progresses, Colonna realizes that he is to write the “truth” about Mussolini being alive and ready to lead the secret Fascist return to power.

My difficulty is that I found I was reading outrageous stories about rumors and innuendo of Italian social, political, and religious life. I would have like to concentrate on the basic storyline regarding Mussolini, however farfetched.

The book is satire, intended to poke fun at his country’s press and politicians. Eco’s day job was a professorship at a university.

It is an easy read if you like that sort of thing.