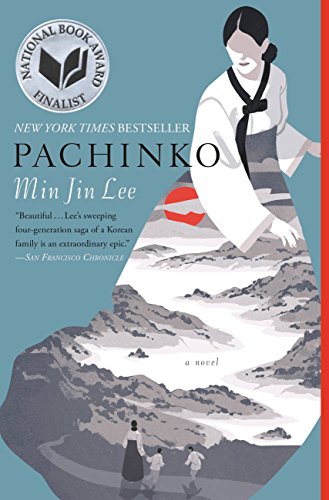 Min Jin Lee came to the United States in 1976 at the age of 7, with her family, of course. Her first novel, Free Food for Millionaires, was listed as a top ten book by the Times (London). She is currently working on her third book to finish a Korean Trilogy.

I have not read the first book, so can only comment on Pachinko. I checked the National Book Awards website and selected this book because of its setting in Korea by a Korean author. I had no idea how good the story is.

First, let me clear up a couple of things. Pachinko is a unique form of gambling in Japan. I had never heard of it and it was not mentioned in the story at all until about halfway through the book. It was a children’s game in the 20’s & 30’s set up in stores to keep kids entertained. Those were simple pinball games.

After the war, Japan had a few billion leftover ball bearings. Someone decided to redesign the old game to use the balls. That was when the gambling feature was added. See the website below for details.

What does that have to do with the story of Koreans? I’m glad you asked. The story begins in 1910 near Busan (what we wrongly called Pusan), but moves quickly to 1932, literally chapter 2.

1910 was important to Korea because it was the year Japan decided they could run Korea better than the Koreans (not too far from the truth at that time). 1911 was important because Sunja’s parents were married and Sunja was born a few years later.

Sunja is the central character of this family saga. She was hard at work as chapter 2 opened and she was still active in the last paragraph of the story in 1989.

Sunja was taken in by a wealthy Korean who traveled between Busan and Osaka, Japan. When she became pregnant, he wanted to set her up in a fine house and send their child to school. Why not marry? His Japanese wife in Osaka would not allow it.

A Christian minister passing through agreed to marry her and they sailed to Osaka. They lived with his brother and wife. Sunja birthed two boys. The two were like Esau and Jacob, but they loved each other, unlike the two Biblical brothers.

The six of them struggled to survive in a city and country that considered Koreans to be only slightly better than pigs, if not as smart.

I knew in general terms that the Japanese look down on Koreans, but I had no idea how bad it really was. Those attitudes are still present, much like the American racial divides.

What does the story have to do with Pachinko gambling? You will have to read the book to find out.

I must confess that the first couple of chapters put me off a bit. As suggested, chapter 1 covered two decades with people being named just in time to die. Lee also likes to head-hop, a technical term for the writer entering the minds of several characters to give us several points of view, often in one paragraph. That settled down as the story progressed, and as I got to know the main characters.

What characters. Lee created people so real they could hardly be contained on the pages.